Like most other locations on the East Coast, Bures constructed defences in the event of an invasion by Germany.

The majority of defence works were built to resist invasion chiefly by an army equipped with armour and artillery. In 1940, it was considered the most effective method was through using defences that made use of the natural contours of the land.

Consequently, at the height of construction, a pill-box was erected every 20 minutes in the UK.

To defend the bridge across the river at Bures, a concrete pillbox was built inside a saddler’s shop, now the entrance to Chambers bus yard.

As the enemy stormed over the river it was planned that "regular troops" would be in position inside the shop. This housed a large artillery gun ready to fire directly along Bridge Street towards the river bridge. 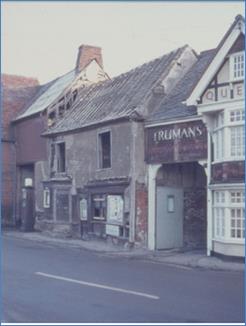 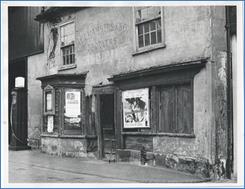 The 5th Royal Horse Artillery (RHA) battery of 10 to 12 men manned the Pillbox and their accommodation was at the rear of the Post Office. This Royal Artillery would have been stationed at Colchester Garrison. 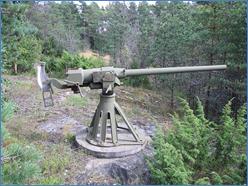 This gun was used extensively during WW1, after which it was considered obsolete for combat use. Of the 3,984 produced it was estimated that 1,640 still existed in 1939, so those which were still serviceable were pressed back into service.

With a 6pound shell, it had an effective range of 4,000 yds so the bridge was well within easy reach of its firepower.

The use of the regular Army was confirmed with an interview with Gordon Webber who stated “that a regular soldier came to ride one of his horses at Bakers Hall”, this eliminates the supposition the Home Guard manned the gun at Chambers.

XI Corps was made responsible for the Eastern Region, which included all of East Anglia, in the summer of 1940
It looks as though the 6 Pounder was removed from the Chambers’ pillbox that month, and the same happened to the 6 Pounders at CHAPPEL and COLCHESTER
So we must assume after 1941, there was no longer a Gun at Chambers and not as some believe until the war ended in 1945

What happened if the enemy unfairly came around the corner from Nayland Road, is unclear!
Captain Mannering would no doubt say “the Enemy, are not playing by the rules, Wilson”

One of Suffolk`s secret weapons which were designed to strike fear into Hitlers invading troops in the 1940`s is about to be exposed.
To defend the bridge across the River Stour at Bures, a concrete pillbox was built inside a shop on the Suffolk side of the river.
As the Nazis stormed over from Essex, it was planned that the local Dads Army or any regular troops about at the time, would be in position inside the shop.
Part of the wooden fascia of the shop would drop down on hinges and Hitler`s men would be blasted off the bridge by an anti-tank gun inside the pillbox.
The pillbox was so well constructed, it has made the shop useless for any purpose.
For several years the Parish Council has expressed concern about the appearance of this dilapidated building and now plans are afoot to have it replaced.
Boxford builders “W.B. Kingsbury and Sons Ltd” has been asked to demolish the shop and build a new house on the site for the owners, coach firm “H. C. Chambers and Sons Ltd” – without the pillbox
Mr Ian Holgate supervisor for the builders, said the demolition of the pillbox might present problems because of the proximity to other buildings.

Pneumatic Drills would be used to break up the concrete.

The shop/pillbox was demolished in 1973, however no evidence was found of any hinge mechanism, so how did they fire the gun?
The logistics of fitting hinges to a shop front which was possibly 20ft high and with a considerable amount of weight, would in my opinion be impractical.
To drop the front down, hinges would have been at ground level which would have been enormous in width and thickness to carry such a weight.
Due to the size of the hinges, I cannot see how they could have been missed during the demolition.
Village Folk-Lore perhaps?

Charlie Martin the local Blacksmith from Hamlet was killed in a road traffic accident on July 9th, 1944 with a UK Army lorry. He was looking in the window of Arthur Beamonts radio shop in the High Street, when he inadvertently stepped back into the road just as a lorry came around the corner.
This vehicle was most probably returning from one of the USAAF Suffolk airfields, after delivering munitions for their aircraft
Charlie was fatally wounded by this impact. The lorry driver was only about 20 years old, completely innocent but badly shaken up by the incident.

Also, in 1943 saw the arrival of the USAAF constructing the Forward Ammunition Depot by Butlers Farm.
All of the sand and aggregate required for the concrete work would have been extracted from Ferriers Pit. This would have generated a massive amount of traffic to the west of the village

The Parish Council applied to have a Siren mounted on top of the Dye Works, but this was rejected.

Consequently, the village had to rely on the works “hooter” sounding the alarm in case of an attack.

However, this had the advantage that it was far louder than a siren. It wasn`t a matter of throwing a switch, in reality it meant climbing a ladder to the top of the works boiler and turning a steam valve on/off for a warning or permanently on for an all-clear.
Some nights there may have been several warnings.

In this event, Mr Creek who looked after the welfare of his children and their disturbed sleep during the night, allowed them to start school an hour late in the morning. However, as Mr Creek may well have been busy through the night, it also allowed him to catch up on some sleep

The church bells would be rung in the event of an invasion.

Although Bures was a rural village, it did not escape the attention of the enemy.
Sadly, a plaque inside St Mary's Church lists the names of four residents (Willingham family) who lost their lives in the village.  (see Chapter 13)

Regrettably, we also suffered a further loss, not by the Germans but inflicted by our own side.

Gordon Drake was treated at St Leonard’s Hospital in Sudbury for his injuries, when a stray antiaircraft shell hit the slaughterhouse on October 19th, 1942.

Another workman, Reginald Drury was killed and another two, including Walter Smith who was admitted to hospital. The shell was reported to have come from the Colchester Anti-Aircraft Battery.

Incendiary bombs fell on the Cemetery, St Edmunds Hill and land at Lt. Bevills.
Doodlebugs were not only confined the major cities, one fell on farmland between Bakers Hall and the railway line, breaking numerous windows.
There is a report of the Signalman in his box near the rail siding being killed by shrapnel (unconfirmed)

Another rocket fell on Cattleys Farm, near Daws Cross causing a substantial crater in a field

To keep morale high in the population, men arrived in the village to cut up iron railings and gates from every property without even asking for the owner's consent. The intended destination for all this scrap was to be melted down and turned into munitions. Like a lot of other villages found after the war, it was just dumped and made no use of whatsoever.

Another source of raw material was aluminium which was required to manufacture aircraft, Aluminum saucepans were the ideal candidate and were readily handed over by housewives. 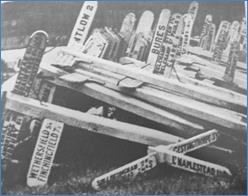 All roadside signposts were removed to hinder the enemy if they were ever to invade. This was not common to Bures but all over the south & east coast.

However, I have seen photographic evidence that the Germans photographed every square inch of the British Isles to such high definition that houses, roads, bungalows can easily be defined.
I doubt very much whether the enemy would have relied too much on our signposting.

It is thought that the collection obtained by the Germans, is now held in an American Library.

Find the Bures signpost in the photograph?

Bures Hall (now Nether Hall next to Bures Mill) had rooms at the rear to accommodate a few German POW`s They were employed on the farm at Nether Hall, such as Milking the dairy herd.

November 9th 1945 - the USAAF pulled out of Butlers Farm and Bakers Hall.

Lamarsh end of the village. He quickly returned to report the incident, but it was initially greeted with some scepticism. The bomb disposal unit later turned out to defuse the object.

Supposedly, a dam was built across the River between the modern-day Millennium Bridge and Bures Mill to prevent the Germans using it as a means of transport.  However, this is unconfirmed and does not appear on any defence maps